The Oculus Rift shipped today. If you’re neither a nerd (like me) nor a gamer (not like me), you probably have no idea what this means or why you should care.

So, why should you care about the Oculus Rift? It could be the future of home entertainment, work, and the thing your kids request for Christmas. Also, you should care because Facebook cares. Oculus VR (the company who makes the Rift) was purchased by FB in 2014 for $2 billion. Facebook buys or tries to buy everything that is, or will be cool. You may hate the changes in your timeline, but you stay with them. Maybe you don’t use FB, but like sharing pictures with retro filters. Yeah, they own Instagram. Encrypted messaging to do your drug deals? WhatsApp has you covered. Facebook is always looking for the latest way to get in front of your eyeballs. Strapping a screen two inches from them is a good way to do that. This is the essence of VR.

Virtual Reality (VR) is a term that covers a lot of things. For the purpose of this article, what you need to know is that VR is a set of goggles that you put on your face and plug into your computer or smartphone. Inside the goggles is a screen and a couple of lenses, each lens looking at a slightly different image to create a three dimensional space. How is this different from 3D movies? In VR, you can move your head around and explore the 3D space that has been created. When the effect is done right, you feel like you are actually in a new room (or forest or outer space or whatever). You have seen this tech before in such classic movies as The Lawnmower Man. 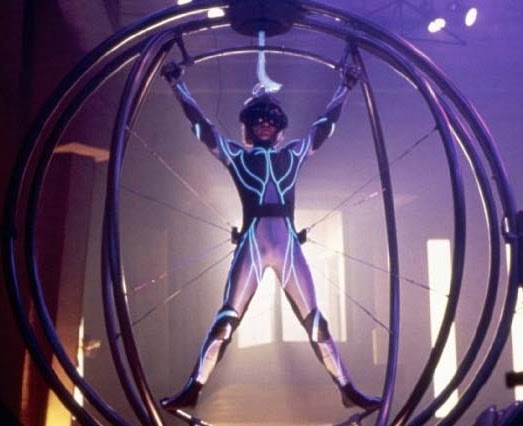 Okay, how did we go from crap sci-fi to here?

Oculus is credited as having cracked the puke problem in VR. Your brain doesn’t normally do too well when your head moves, and then a split second later, your environment moves too. The disconnect between vision and motion triggers an alarm that says , “you might be poisoned!” Your body responds with vomit. That little split second is called latency and it is enough to make VR not fun at all, unless you are playing the game adaptation of Stand by Me: Lardass Simulator. Then everything is going according to plan.

What can the Rift do? Right now, it is mostly focused on gaming. If you like games and have a lot of money to buy both the Rift and a super fast computer, this is the thing to buy. Reviews are out today and the critics seem to like it, for a first generation product.

Oculus isn’t the only player in this space, though. HTC has a device coming out next month. Sony has another coming in the fall. If enough people get on board, VR will be here to stay.

This is why you should pay attention now (Note that I am not necessarily recommending that you buy now). VR could become more than just a video gaming platform. When that happens, we will be visiting those cities and countries that we always wanted to see but couldn’t afford. We will have video chats with far-away relatives where it feels like we are in the same room. And, of course, we will have a new platform for all of the sex stuff that comes with new technology. When the sex stuff happens, you know it’s here to stay.

If you want to mess around with the future, but don’t have $1500 to spend ($600 for the Rift plus the cost of a fast computer), consider picking up Google Cardboard. It is only $15 and you can use it with your smartphone. I bought one a couple weeks ago and have enjoyed both using it and watching my non-techie friends use it (with grins on their faces). If you have a Samsung Phone, I recommend checking out the Gear VR, which uses some Oculus technology. Both are good entries into this new space, though not as immersive as dedicated VR setups.

One of our possible futures has arrived. You should read more about it:
– Wired’s 2014 Cover Story on Oculus and its founder
– The Verge’s Review
– Ars Technica’s Review
– All of the great memes that came from Time magazine’s tone-deaf cover photo of Oculus’ founder
– Google Cardboard
– Gear VR

View all posts by scottkumis

One thought on “The Oculus Rift is Here”